One of the high-lights of Theron’s professional football career was in the summer of 1994 just after leaving Winston-Salem State University, Theron began his professional football career as a “long shot”, Undrafted, free-agent in Head Coach Denis Green’s pre season rookie and free agent mini-camp with the 94’ Minnesota Vikings.  Theron was later cut from the Viking before the start of the 1994 NFL Regular Season.  The following year Theron was invited back to training camp with the Vikings as a camp body and later released again before the start of the 1995 NFL Regular Season.

In 1999 Theron enlisted in the United States Army Reserves and is now an Operation Iraqi Freedom Combat Veteran, serving two tours of duty to Kuwait and Iraq as a decorated Non-Commissioned Officer who received several awards and medals including a Combat Action Badge and an Amy Commendation Medal for excellence in leadership as an Assistant Convoy Commander.  Theron later volunteered for a third tour of duty with 1st Army Division East as a Counter IED Instructor to help train soldiers being deployed to Iraq and Afghanistan how to recognize and defeat the threat of insurgents and insurgent-made IED’s (Improvised Explosive Devices) that have claimed the lives of many other Service Members in both theaters of combat.

In 2011 after his last deployment, Theron began the "FIGHT PTSD!" Initiative dedicated to combat veterans diagnosed with combat related P.T.S.D. called Operation Warriors Dream to help serve as a therapeutic outlet for Veterans returning home from  War and vessel to bring about more awareness of Post Traumatic Stress Disorder (P.T.S.D.) to all Service Members . 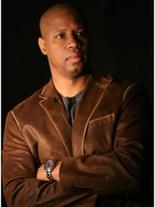 ​Meet former US Army Staff Sergeant Tad Davis, call-sign “Ghost Dog”.  He is your average “Red Blooded” American Iraq / Afghanistan War Veteran and hometown hero. Home at last from being deployed multiple times and is looking to start a new life in the civilian world as a small business owner of a local martial arts dojo.  For the most part life is good.  Until… trouble comes to town in the form of a demon named Zoab who is determined to unleash Hell on Earth and become ruler of the undead and unholy. Unlike any other fictional hero, Ghost Dog is only a mere mortal.  However, the Archangel Michael has bestowed upon our hero divine powers that will ultimately send Zoab back to the unholy depths from whence he came.